How COVID Redefined Status Markers in the Workplace

The word “status” has two primary definitions in the Merriam-Webster dictionary.
1a: position or rank in relation to others
1b: relative rank in a hierarchy of prestige

Until recently, I was not fully conscious of how much the pursuit of status and prestige had been ingrained into me through my upbringing (family), social institutions (schools/university, jobs etc.) and the media. I wondered why I wanted certain things – fine clothing, a luxury car, a nice house with a yard etc. etc.

Learning about Rene Girard, a French writer and philosopher whose teachings had a big influence on Peter Thiel, and his writings on the mimetic (imitative) nature of desire opened my eyes.

Luke Burgis, who has written extensively on mimetic desire, explains the theory as follows. “The value of objects is not objective—it’s subjective. And that subjective value is determined mimetically, based on our relationship with others…. we assign value to things (and therefore desire them) according to what other people want.”

All this to say that what we desire (and thus pursue) is heavily determined by our surroundings (people and environment, both physical and digital.)

Signaling: The Use of ‘Markers’ to Communicate Status

In every situation where we interact with others, particularly when there is something new about the people or the surroundings, we instinctively try to figure out the status of all the parties. This happens subconsciously. Sometimes we don’t always know the relative status of everyone in a group setting (i.e., it is an information problem). Then we rely on signaling, interpreting the behavior, reactions, branding and position of members in a group to understand where people stand in the hierarchy.

Kevin Simler has written extensively on this phenomenon, about how we do things with what we tell ourselves are positive intentions, but which have other, self-interested motivations. His book, with co-author Robin Hanson, The Elephant in the Brain: Hidden Motives in Everyday Life is a great deep dive into this topic.

For example, all the elements in the image above, particularly the stickers on the computer, provide us with information (i.e., signals) to help form an opinion of the individual.

Signaling Status in the Workplace

There are three common ways we signal status in life and in the workplace.

The importance of physical space is the topic I wish to explore in more depth, because it has been so heavily “disrupted” by the transition to remote work post COVID. Somehow, while we have discussed the practical changes in depth, the status implications have not been covered a lot.

We refer to the process of career advancement as “climbing the ladder.” The meaning is clear – as we get higher up the rungs of the metaphorical ladder, we are gaining status and becoming more successful.

For generations, the tallest building in most towns and villages was the top of the local sacred space – church, temple, mosque or equivalent. And the person chosen to deliver the message from God, typically occupied a space above the congregants. Physical space was an important signal of status and prestige.

For a little over a century, the office tower or skyscraper has replaced the religious structure as the tallest building in a city. This trend started in New York and Chicago and has since spread to all cities across the world. Often these buildings are tourist attractions. People pay to go to the top (or near the top) for an opportunity to look down on the breadth of the city below them.

Physical Space as a Status Marker in the Workplace

I had the opportunity to work for many years in the early 2000s in one of these “hallowed” skyscrapers — 767 Fifth Avenue — the tall office tower to the southeast of Central Park with alternating white and black vertical stripes.

There are myriad ways physical space is used to indicate relative status.

How Remote Work Has Removed Many Common Status Markers 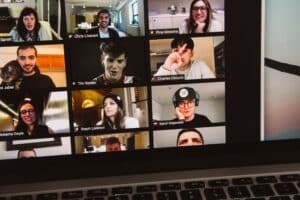 So many traditional markers of status have been lost. In many ways, COVID has been a ‘great leveler’ of status.

The last few centuries have taught us that large scale physical change leads to social change. The railroad replacing the canal system for commerce transport increased the importance of certain cities and decreased those of others. The proliferation of affordable air-conditioning led to massive population increases in the Sunbelt and Southwestern parts of the United States.

Status is domain dependent. It is not linked directly to age. Experience only matters within a particular field. All of us are faced with situations where we need to cultivate our status.

As I build my business, there are myriad situations where I am in the lower status position looking up at those around me for help and input. The playbook I am following includes the following: (btw, I could not resist using a cute dog photo.)

Join our community to grow with other like-minded professionals. Learn more.

Adi’s experiences as a CFO and HR leader in start-up companies inspired him to start the CxO Leadership Accelerator. He saw firsthand the challenges in building a satisfying career, the importance of leaders in developing people, and the difficulty in building broad business acumen while excelling in your functional role. Prior to his operating career in start-ups, Adi held roles in a growth capital investment firm and in the corporate development and strategy department at a Fortune 500 company. Adi is an active volunteer mentor in the FirstRound Capital and TechStars networks as well as within his University alumni communities. Adi was born in India and immigrated to the US at age ten. He attended Princeton University (graduated with a degree in Politics) and the Stanford Graduate School of Business. He lives in the suburbs of New York City and has two adult sons and two lovable, crazy dogs.